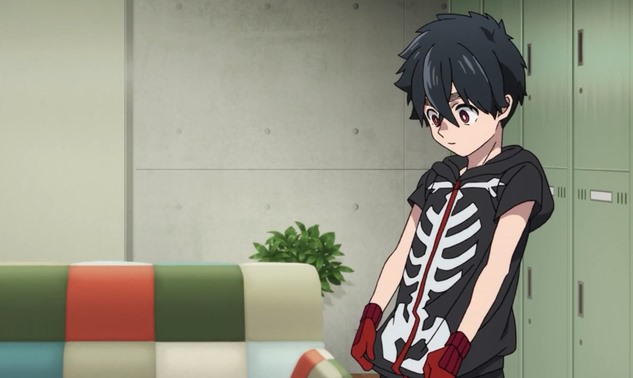 I went into the Kemono Jihen anime series completely blind as, other than watching the trailer for the show late last year, I had little idea of the story or what to expect.

That I quickly pushed this to the top of my Best of Anime 2021 list after just one episode, and decided it was criminally underrated at the same time, then was quite a surprise.


Particularly as, from the synopsis of the series and the trailer artwork, for some reason I had it in my mind the story took place out in the Japanese countryside during the Edo period.

That the plot started in the country but quickly switched to Tokyo, and was set in the modern era, was a welcome surprise.

As this is a Kemono Jihen recap and a review, there are many spoilers, of course.

If you have not yet watched Kemono Jihen, Episode 1, and don’t want the experience to be spoiled, stop reading now. 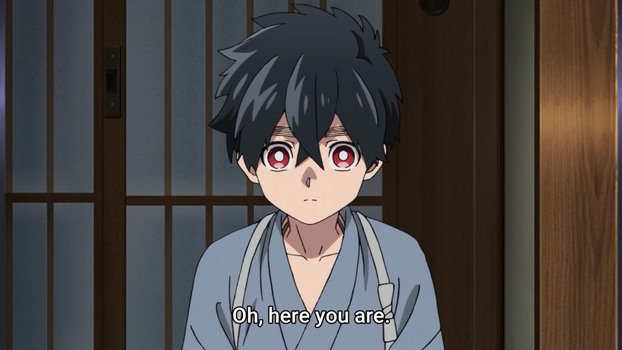 The first episode of Kemono Jihen is called ‘Kabane‘ and, as you will learn quickly, centers around a strange boy who lives with his aunt and cousin in a village somewhere in Japan.

Kabane is hated by his cousin, Yataro, and feared by his aunt, while the neighborhood kids ignore his existence except to tease him and call him Dorotabo for how dirty he gets working in the fields and how badly he smells.

It is not surprising then, when an investigator arrives from Tokyo to check out several mysterious livestock killings, and they discover it is Kabane he is interested in talking to, they quickly become annoyed.

Kabane, however, is able to tell the investigator, Inugami, that he is the one that has been tasked with disposing of the dead animals’ bodies,

He then explains the animals have had their intestines chewed to pieces and, if there were monsters in the world, it is likely something they would do. Every death also happens on the night of a full moon.

For the next few days, Inugami and Kabane work together in the fields looking for clues about the livestock deaths, and Inugami begins to find out about the boy’s past. 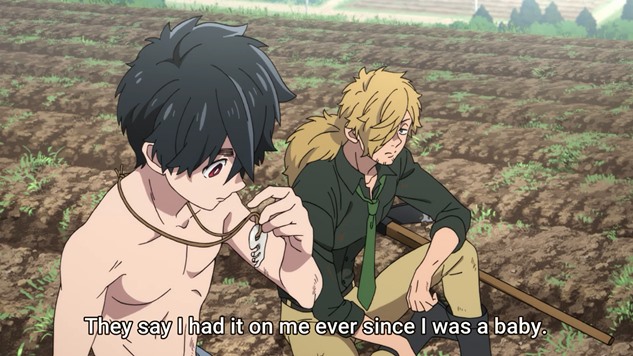 Kabane tells him he was abandoned as a baby and that his aunt took him in. He also shows Inugami a mysterious pendant he wears around his neck, and that was found on him as a baby.

Inugami asks the boy if he can look at his pendant and then tells him it is a ‘lifestone’. It is a special stone only formed under certain circumstances, with few of them in existence.

He adds there is no way Kabane was abandoned, as a lifestone is not something a parent would leave with a child they did not want.

Inugami inquires if Kabane would like to meet his parents. He is, after all, a detective and could probably find them. Kabane is not sure if he wants to. At least at that point.

On the night of the full moon, Kabane’s cousin Yataro sees him outside in the yard waiting for Inugami and becomes enraged. He was the one that wanted to befriend the Tokyo detective so that he could leave the small village.

That Kabane is the one the detective is interested in made him so angry he starts to push Kabane around. 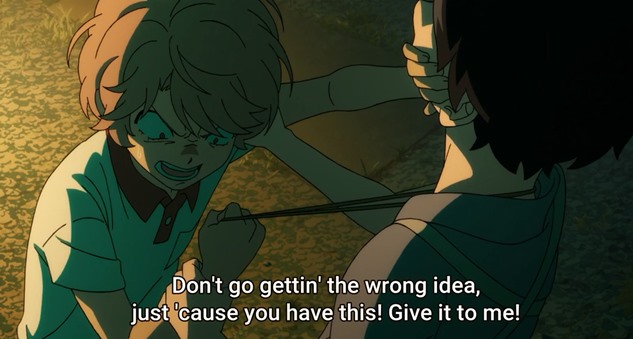 Yataro then rips off the boy’s lifestone, which causes Kabane to punch him.

As he is lying in the dirt cursing at the boy, Kabane turns into a red-eyed demon and rushes at his cousin. The boy screams and runs away, leaving Kabane to grab his lifestone and then turn back into an ordinary child.

But, when Inugami arrives looking for him, the boy tells him to stay away from him saying “I am the culprit. I am the monster”. 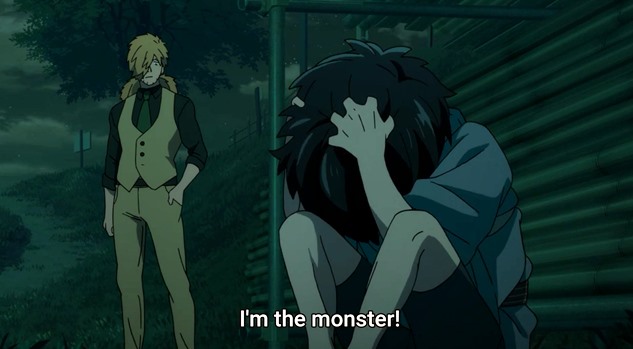 Inugami tells him “I am going to show you my rear end” then calmly pulls down his pants to show his tail.

It is then he explains to the boy he himself is just like Kabane.

A ‘Kemono’ — a non-human being that does not get involved with humans. But…occasionally a Kemono will fall in love with a human and have a child. Inugami says Kabane is one such child — a ‘hanyo’ the son of a human woman and a bloodless demon or ‘khoular’.

The lifestone around his neck prevents him from regressing into his ghoul side and attacking people. As long as he has the stone, he can be a person. If he loses it, he cannot.

With that lifestone always around his neck then, there is no way he is the monster that killed the livestock.

Kabane and Inugami head off in search of Yataro, asKabane realizes his cousin may be in danger.

Sure enough, they come across Yataro being attacked by two ghouls. Inugami and Kabane kill the two ghouls and save Yataro.

While Yataro is still unconscious Inugami confesses he came to the village after being hired by Kabane’s aunt to kill the boy. She knows what he is, and is afraid he will become dangerous and become a threat to her son Yataro. 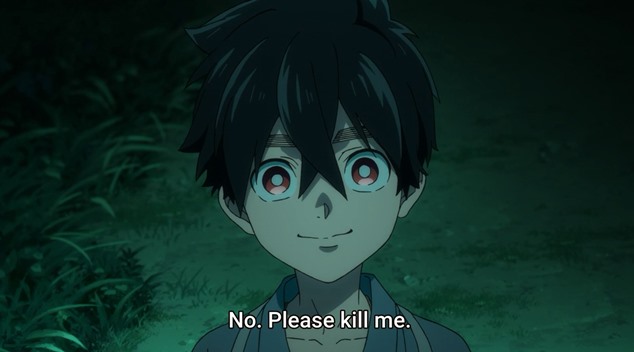 Inugami then asks Kabane for a second time if he would like to meet his parents, or if he would prefer to die. Kabane says “No. Please kill me”, so Inugami shoots the boy in the head.

He then carries the still unconscious Yataro along with Kabane’s body back to his aunt’s house. There he returns her son to her and proves he has killed her nephew. The aunt sobs as, not being an evil woman, she feels guilty about what she has paid Inugami to do.

A few hours later, Inugami is driving his car into the suburbs of Tokyo with the body of Kabane in the back seat.

All of a sudden, Kabane wakes up, sits up in the back seat and asks “Aren’t I supposed to be dead?”

Inugami laughs and says “I told you, ghouls don’t die when you kill them”.

He then drives Kabane back to his office where he asks the boy if he would like to stay with him. The episode ends with two other children walking in arguing about pizza. 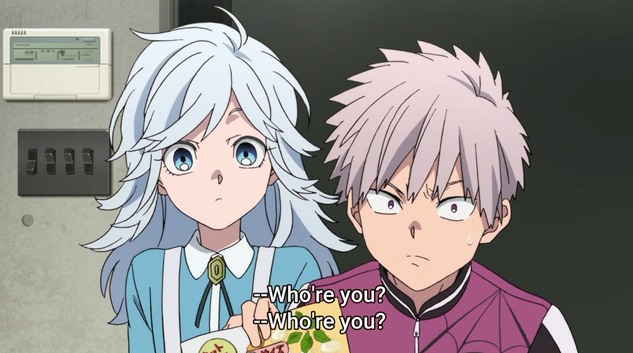 The anime’s first episode is one of the strongest of any anime this season.

The plot is tightly written, the art style is gorgeous, the animation is smoothly done and the voice acting is excellent. Especially that of Natsumi Fujiwara who plays Kabane, and Junichi Suwabe as Inugami.

To say the story is only 20 minutes long, a lot seems to happen, with every second pulling the viewer in even more, leaving you desperate to watch Episode 2 to find out what happens next.

The story itself features traditional Japanese mythology that, not being Japanese myself, was immediately intriguing to me. It was also skillfully woven into what is an otherwise extremely modern Japanese world.

Much of the first episode also seems to be leaning in the direction of each episode being a standalone story. When Inugami and Kabane arrive in Tokyo, however, it is only then the main story begins to emerge and we realize the bigger picture is what is actually important.

Add in that the characters are either likeable, fascinating or both, and Kemono Jihen is likely to be an anime viewers come back to again and again. Just to revisit the people they like.