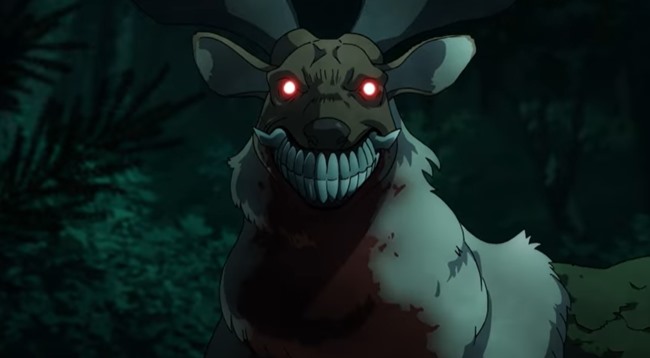 Ooh, now this looks exciting — the upcoming Kemono Jihen anime just got its first trailer and, wow, if the entire anime is as beautifully drawn as the artwork in the trailer, and as exciting, then count me in.

The anime series is based on the manga Kemono Jihen by Sho Aimoto.

It tells the story of what happens when animals in a remote village begin to die and then rot away in the space of just one night. A paranormal investigator called Inugami arrives from Tokyo and begins to investigate.

Soon he meets a young boy who is nicknamed ‘Dorotabo’ by the other children in the village. Shunned by them, Dorotabo, whose nickname is the name of a ghost, doesn’t go to school but works in the fields instead.

He begins to help Inugami find out what’s going on but, in the process, Inugami begins to wonder is the boy really human or is he something else?

Kemono Jihen is being directed by Masaya Fujimori (Izetta: The Last Witch), Noburu Kimura (Gundam Build Divers) is in charge of scripts and series composition and Nozomi Tachibana (Animation Director for ClassicaLoid) will be character designer. (Article cont. below…)

The anime series is being animated at Ajia-do Animation Works (How Not to Summon a Demon Lord), with background art by Studio Inspired (A Silent Voice).

The Kemono Jihen anime will premiere in January, 2021.

Now watch the just-released Kemono Jihen trailer below, check out the key visual above and then tell me this doesn’t look really freaking exciting!