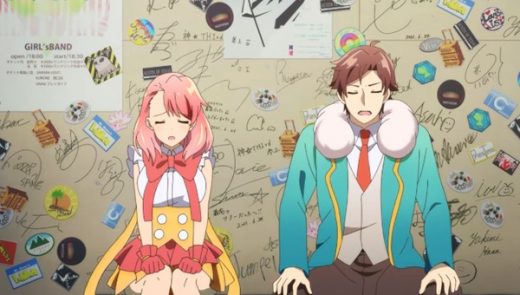 One of the cutest looking upcoming anime got a new promotional video, key visual, more staff and cast announcements and a summer premiere date today via its official website.

That anime is Phantom of the Idol (aka Kami Kuzu Idol), the anime based on the manga by Hijiki Isoflavone.


And can I just ask, was it only me who thought the Phantom of the Idol voice actors sound amazing in that new PV?

Some of those Phantom of the Idol voice actors were named today, and they will join already announced Fumiya Imai (voicing Yuuya Niyodo), Nao Touyama (playing Asahi Mogami), and Shun Horie (as Kazuki Yoshino).

The newly named voice cast is Eri Kitamura (as Hitomi Shinano), Hitomi Ueda (voicing Kasenjiki), You Taichi (as Tsugiko), Manaka Iwami (as Shigutaro) and Sho Hayami (as the Narrator).

Yep, we have some heavy hitters in this voice cast (Shun Horie, Nao Touyama and Fumiya Imai in particular), so it’s no wonder they sound so perfect for these roles, eh?

Staff on Phantom of the Idol anime series

As for the staff working on Phantom of the Idol, they are Daisei Fukuoka (Radiant) who is directing, Yasuko Aoki who is in charge of scripts, and Saori Hosoda as character designer.

Animation production is being carried out at Studio Gokumi (Ms. Vampire Who Lives in My Neighborhood).

The Phantom of the Idol plot

The story of Phantom of the Idol follows Yuuya, half of a pop idol duo ZINGS, who really can’t be bothered to perform even when he’s on stage.

So much so, his agent is dumping him, until Yuuya meets a cute girl who looks like and acts like the perfect idol backstage.

Unfortunately for her, the girl, Asahi Mogami, is a once popular singer who has been dead for a year.

But can she help Yuuya get into being an idol by taking over his body and performing herself?

Yep, this thing sounds like a lot of fun!

Watch the just released Phantom of the Idol promotional video to hear those fabulous voice actors, and mark your calendars for the anime releasing some time this summer.

Until it does, look out for the first volume of the Phantom of the Idol manga in English, as that will be coming out via Kodansha Comics in May.