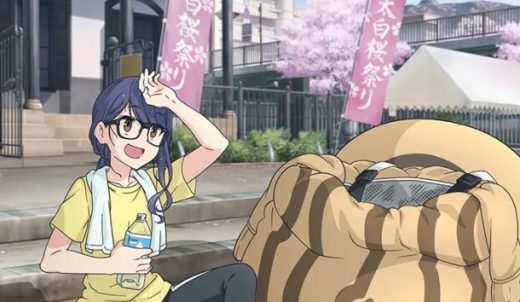 As our lovely Laid-Back Camp girls grow up in the upcoming film based on the hit anime series, a third Laid-Back Camp film key visual has been released this week showing yet another one as an adult.

That key visual follows on from the first visual showing Nadeshiko doing her laundry, and the second featuring Rin obviously coming home from work.

This time, the prettily designed third Laid-Back Camp film key visual has Chiaki (voiced by Sayuri Hara) having a rest, and drinking a much needed bottle of water.

Standing next to her is the festival costume she has obviously been wearing before she took a break.

Yoshiaki Gyougoku is back to direct the Laid-Back Camp film, with Jin Tanaka and Mutsumi Itou writing the script and Mutsumi Sasaki as character designer.

All voice actors will also reprise their roles from the popular anime series.

C-Station is in charge of anime production.

The film and the anime series are based on the manga of the same name written and illustrated by Afro. The manga currently has 12 volumes in publication in Japan, and 10 in English translation.

The English versions of the manga are being published by Yen Press.

The Laid-Back Camp film is due to be released some time this summer, and will follow on from the first two seasons of the anime series.

Laid-Back Camp Seasons 1 and 2 are streaming on Crunchyroll.

Enjoy the sweet and very funny Chiaki in the third Laid-Back Camp film key visual (via the film’s official website), and check out the teaser trailer for the film.