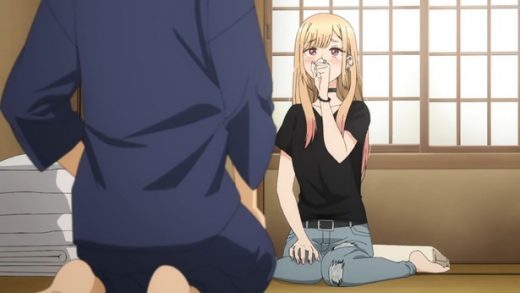 The day a new episode of My Dress-Up Darling drops is a day when I am watching the clock until I can hit ‘Play’.

A day like today, when the latest episode does not disappoint (well, none have yet, let’s face it!) is an even better day.


Especially when we are now at My Dress-Up Darling, Episode 4, “Are These Your Girlfriend’s?“, and we have finally arrived at the time when Gojou must prove to Marin he can make a cosplay outfit far better than she ever could. 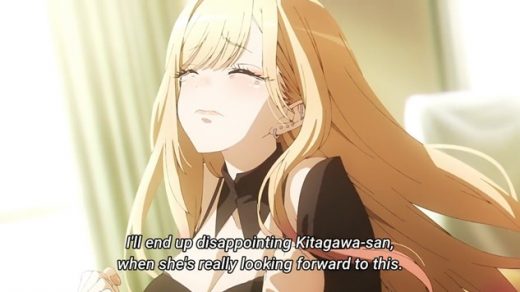 My Dress-Up Darling, Episode 4 recap — “Are These Your Girlfriend’s?”

Episode 4 of the hit anime starts, of course, with Gojou panicking he won’t have enough time to finish Marin’s first cosplay outfit.

After all, the cosplay event she wants to go to is in two weeks, and he thinks it will take him a lot longer than that to sew her outfit.

Things go downhill from there, however, as his Grandfather falls as Gojou arrives home and he has to be taken to the hospital.

Falls, it seems, because while at first he was thrilled to hear his grandson had been out shopping with a friend, he was shocked when he saw the women’s hose he had bought fall out of his bag.

(Remember, his grandfather had already seen Gojou playing a dodgy video game in a previous episode. So his concern about his grandson had already started).

All of this upsets Gojou as well, as he really is a kind guy, and now he is worrying about his grandfather on top of stressing out about Marin’s dress.

Marin, of course, proves herself to be just as sweet and lovely as we expect when, upon finding out about Gojou’s grandfather, immediately asks if she can help.

“Believe it or not, I can cook and stuff”.

But soon Gojou also discovers he has mid-term tests to study for, and now he really feels overwhelmed. 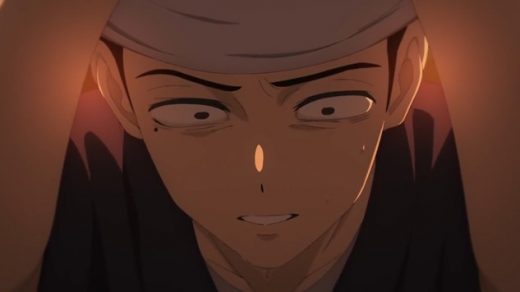 He has problems saying “No”, and so when a woman calls wanting a tour of his grandfather’s hina doll studio, he agrees to do it himself. The next day.

Soon Gojou is working every second he has, trying to create a pattern for Marin’s costume, studying for exams, visiting his grandfather who is recuperating at his uncle’s house, and showing people around the hina doll studio.

After exams, Marin tries to talk to him but he rushes off, and when she arrives at Gojou’s house with dinner for him, he isn’t there.

Later that night we’re back with Gojou, who cannot sleep as he is worrying about not finishing anything and so is “half-assing everything” and, in his mind, being a total failure.

Gojou then remembers a time when he was little, and he asked his grandfather if making hina dolls every day was difficult.

His grandfather laughed and admitted it was, but then said he loved doing it because of his customers — “It’s because you want to make somebody happy that you can keep going, even when it’s hard”. 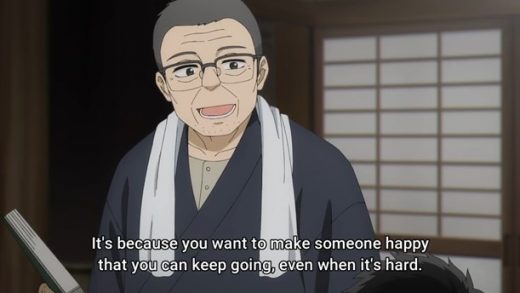 That memory gets him back to sewing Marin’s outfit, as he knows how happy she is he said he would make it for her. So he stays up all night and finishes it.

But, when Marin comes over to look at the outfit, she is amazed Gojou thought she needed it to wear for a cosplay event that day.

As she tells him, there are plenty of events coming up if you know where to look for them, and she had no idea it took so long to make an outfit.

Then, as Gojou exclaims how glad he is he has time to finish her outfit, Marin begins to cry as she realizes how tired he is, and how hard he had to work.

“When you went home after school, I thought you were visiting your grandfather. I didn’t know you were working on the outfit. I’m sorry. So sorry”.

Gojou feels terrible that Marin is crying, and so tells her she should try the dress on to make sure it fits.

Soon the pair are pouring over drawings Gojou has made of Shizuku-tan, the video game character Marin loves, so that the make-up Marin puts on along with her new outfit will be perfect.

Gojou even has false eyelashes Marin can wear, causing her to ask him in a very disappointed way “Are these your girlfriend’s?”.

Gojou almost chokes on his tongue, then tells her he uses the eyelashes on some of the hina dolls he makes. 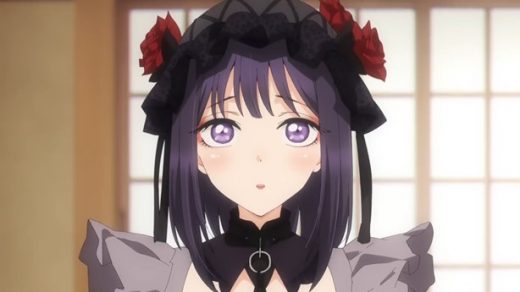 And, of course, when Marin eventually tries on the outfit Gojou has made, she looks just like her precious Shizuku-tan.

But…before we end this My Dress-Up Darling Episode 4 recap, there is another scene before the final one that is extremely important for where the anime is heading.

Of course, you will have to watch it to find out.

You can do that at Crunchyroll.

Meanwhile, recaps of Episode 1, of Episode 2 and Episode 3 are on Leo Sigh. 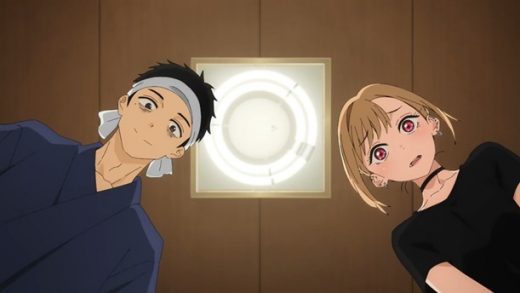 My Dress-Up Darling, Episode 4 review — “Are These Your Girlfriend’s?”

For me, Episode 4 was the best episode of My Dress-Up Darling yet.

Not only did we learn Gojou really has to learn to say he cannot do something if he feels overwhelmed. Even if that means the other person is disappointed.

He also needs to work on his self-esteem as, when things get tough, instead of realizing he took on more work than most people would have done, he blames himself for being “a failure”.

But, even though Gojou may think he is a failure, he still had the strength of character to try again, and to work through the night until Marin’s outfit is finished.

Now that is a guy with heart and a great character. Even if he doesn’t think so himself.

We also learned Marin Kitagawa is just as nice, sweet and kind as we thought she was.

After all, she is far more concerned about Gojou and his grandfather than she is about her Shizuku-tan outfit. To the point that she takes Gojou a beef bowl for dinner, just to make sure he is eating enough.

Then, when she discovers how hard Gojou worked to finish her cosplay outfit, and how tired he now looks, she feels so bad, she takes all the blame on herself and collapses in tears.

I mean, really, it isn’t often you get two of the sweetest people heading up an anime. And two that seem to be destined to fall in love.

People who do their best, work their hardest, care for others around them, and genuinely feel terrible when they do something that causes a problem for somebody else.

In fact, the only problem I had with My Dress-Up Darling, Episode 4 is it just wasn’t long enough, as I could sit watching these two lovely characters for hours.

Seven more days before the next episode. Oh God, really?

Finally, a quick reminder, if you love My Dress-Up Darling as much as millions of people seem to do, you can buy Shinichi Fukuda‘s manga series and read that in between episodes. That way you’ll get more of Gojou and Marin daily.

You can do that at Barnes & Noble and at Amazon.