As if it wasn’t enough the upcoming anime film Josee, the Tiger and the Fish has a beautiful opening theme song (‘Shinkai‘ by Eve, which also comes with a gorgeous music video), it also has an equally stunning ending theme song.

Today, Japanese singer Eve released the music video for that ending theme — ‘Ao no Waltz‘ (蒼のワルツ) — and this one comes with almost five minutes of scenes from Josee, the Tiger and the Fish.


A film that looks like it will be one of the best (and most beautiful) releases of 2020, and a music video that you could stop at any second during its 4 minute 48 second run, take a screenshot, and have a beautiful piece of art you could then frame.

Of course, ‘Ao no Waltz‘ by Eve is just one of the many beautiful songs the Japanese singer has released, known as he also is for anime theme songs like those for Dororo and Jujutsu Kaisen.

As for Josee, the Tiger and the Fish, the long-awaited film will finally release in Japan on December 25th, and is expected to premiere in the west some time in 2021.

The Josee, the Tiger and the Fish plot

The film’s plot follows university student Tsuneo who meets a girl called Josee when he is out walking one day and saves a runaway pram.

When he looks into the pram expecting to see a baby, he finds Josee, a teenage girl who is unable to walk. Her grandmother pushes her around the neighborhood in the pram at times when the neighbors may not be around, as neither she nor Josee want to be seen.

Tsuneo quickly finds himself becoming friends with Josee, a girl whose life is so incredibly restricted compared to his own. (continue reading and watch Eve’s ‘Ao no Waltz‘ music video after the promo…) 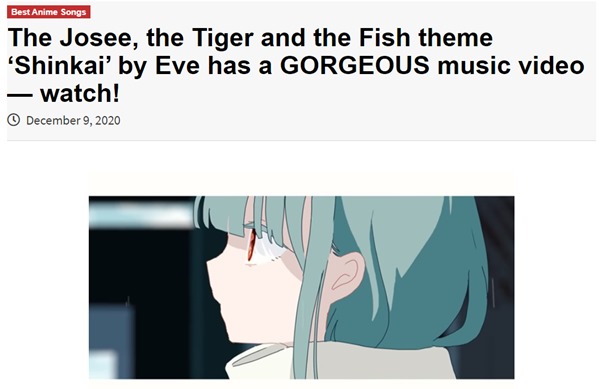 Josee, the Tiger and the Fish is directed by Kotaro Tamura (Noragami), with Nao Emoto (O Maidens in Your Savage Season) as the original character designer, and Haruko Iizuka (Children of the Whales) as animation character designer and chief animation director.

Watch Eve’s ‘Ao no Waltz‘ music video below, and marvel at not only how beautiful the artwork is but just how stunning Eve’s voice.

Then keep an eye out for Josee, the Tiger and the Fish coming to a movie theater near you, as this one looks superb.