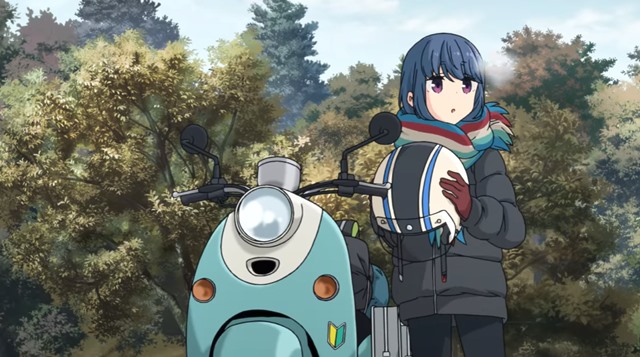 If there was one anime series I have been longing to see for what seems like decades it is Laid-Back Camp Season 2.

Today, an incredibly cute Laid-Back Camp Season 2 trailer was released, and now I am not sure I can wait until January, 2021 when the series will finally begin streaming as, come ooooooon, I want Rin, Nadeshiko, Aoi, Chiaki and Ena back now!

The Laid-Back Camp Season 2 trailer does show all five girls just as we remember them though. Enjoying exploring the gorgeous Japanese countryside, and really getting into the camping they all love.

Other than more of the gorgeous artwork and animation we fell in love with in season one of Laid-Back Camp, and even more beautiful music, the teaser trailer doesn’t show us much of what we can expect in the upcoming new season.

Although it does seem to have Rin being just as independent as she has always been, and the other girls getting along with each other just as they always have.

Let’s hope we won’t see too many changes from season one either, as it looks like there may have been a director switch from the fabulous Yoshiaki Kyōgoku to Masato Jinbo (Heya Camp, ChäoS;Child), and I can’t honestly say Heya Camp was everything I wanted it to be. (We’ll keep you posted as soon as we know for sure).

There is also a new character joining the girls in season two in the form of Ayano Toki. She is an old childhood friend of Nadeshiko’s who Nadeshiko lost touch with, but who is now back in her life

From the drawings that have been released so far, Ayano looks just as cute and charming as the rest of them, so she should fit right in.

AyanoToki will also be played by the incredible Japanese voice actress Tomoyo Kurosawa (O Maidens in Your Savage Season), so acting ability-wise there will definitely be no disappointment there.

Of course, the series is not the only Laid-Back Camp anime we are getting in 2021 either, as a full-length movie is also currently in production.

2021 could be an excellent year indeed!

Watch the just released Laid-Back Camp Season 2 trailer below and try not to get too excited yet as we still have four months to go. Yikes!!