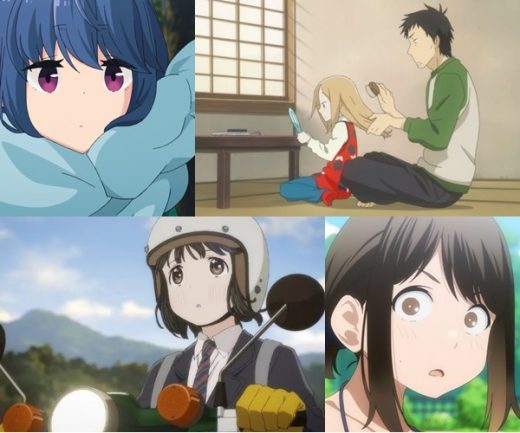 While I love a good shounen anime, sometimes I’m just in the mood to settle down in front of a chill anime, or two, and veg.

Anime that fill me full of joy, happiness and warm and comfy feelings, while putting a smile on my face too.

After all, aren’t there days where you are desperate to watch an anime that won’t make you think too much?

If you too are looking for a few good chill anime to watch on days where you need to relax, here are seven of the ones I love.

All are chill anime I have seen more than twice and, with how much I think these are the most perfect relaxing anime around, I’m likely to watch them many times more. 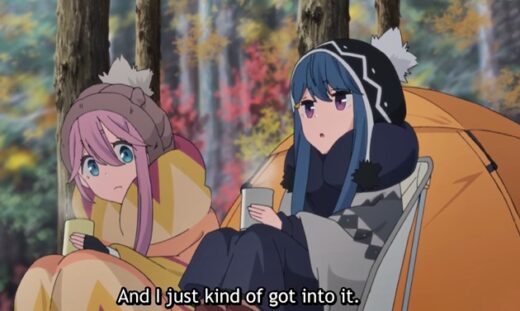 No list of best chill anime to watch if you just need to relax would be complete without Laid-Back Camp. The quintessential slice-of-life featuring some of anime’s most adorable characters, most beautiful background scenes and loveliest music.

This was the first ever slice-of-life anime I watched, and I’ve already re-watched it twice more since.

Laid-Back Camp makes me smile, laugh, dance to that wonderful soundtrack and stare in amazement at just how beautiful Japan looks as, yes, most of the places the Laid-Back Camp girls travel to, including restaurants and tourist spots, are actual spots you could visit the next time you get to Japan. (The art style in this anime is stunning!)

Related: How to watch Laid-Back Camp in order, including its spin-off

In other words, fire up Laid-Back Camp, head off on a trip around Japan with five of the cutest and sweetest girls, including the best girl in all of anime — Rin Shima — then, once you’re over your chill period, start planning your own camping trip.

Because if camping is that much fun, why isn’t everyone doing it?

You can watch both seasons of Laid-Back Camp on Crunchyroll. There are currently 25 episodes, plus 4 OVAs.

And don’t miss watching the show’s spin-off, Heya Camp (aka Room Camp),  as it’s just as chill too.

Banished From the Hero’s Party, I Decided to Live a Quiet Life in the Countryside 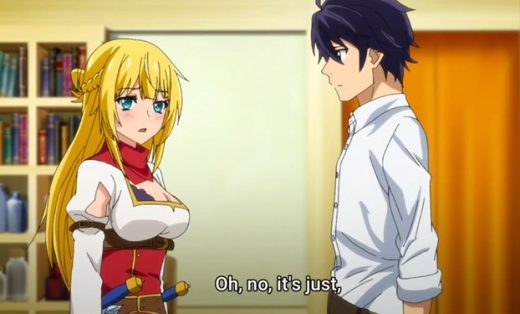 Gideon Ragnason is kicked out of the party his kid sister heads as ‘the Hero’, so he moves to an out-of-the-way backwater where he decides to stop adventuring, and open an apothecary instead.

Only a few days after his apothecary officially opens, however, and in marches one of the area’s most popular adventurers — Rit — someone he knew in his former life, and a woman who now wants to settle down in the town with him and help him with his work.

Banished from the Hero’s Party is sweet, cute, funny and one of the most chill anime I watched all year. Even it’s fight scenes happen in a relaxed, almost nonchalant way.

Whether it is Red and Rit helping a man resurrect his dying onsen business, making cookies out of a cold medicine to make it taste less bitter, or marketing handwarmers ready for winter, the pair are cute and lovely to watch.

Especially when it becomes obvious quite quickly Rit thinks of Red as more than just a friend, and it looks like he may feel the same.

Watch Banished From the Hero’s Party, I Decided to Live a Quiet Life in the Countryside on Funimation.

Oh and, yep, this anime has one of the coolest, most chill ending theme songs too. 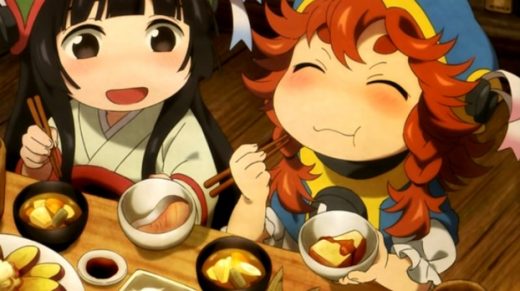 The most chill anime I watched this year — Haukumei to Mikochi follows two tiny women who live together in a tree in the woods.

Not just any ordinary tree, of course, but one that has been carved out and decorated until it looks like the most luxurious and most beautiful cottage you have ever seen.

Hakumei to Mikochi is set in a world where everyone, including the birds and animals, are just a few inches tall. But each of them makes up for their shortness in stature with their gigantic personalities.

Personalities that mean these tiny women spend their time off in the mountains trying to catch a red “evening kite”, a bird that grants wishes if caught. They sing songs in the local town’s singing competition, go fishing at night only to be shocked by a ‘ghost fish’, and cook delicious looking rustic meals.

They meet friends — one who lives in a house on wheels made from an egg. Another who brews the most wonderful coffee, and yet one more who works for the city rebuilding stone walls when they fail.

Related: Chima’s ‘Urar‘ is one of the sweetest opening theme songs you’ll hear — and it opens Hakumei to Mikochi just perfectly

All of this takes place in a magical land — illustrated by stunning artwork and beautiful character designs — and unfolds with such a slow and steady pace, this is the anime that will leave you the most relaxed.

So much so, if you’re looking for a chill anime that will help you sleep and give you nice dreams, you will not find a more lovely one. Nor one with a prettier soundtrack. 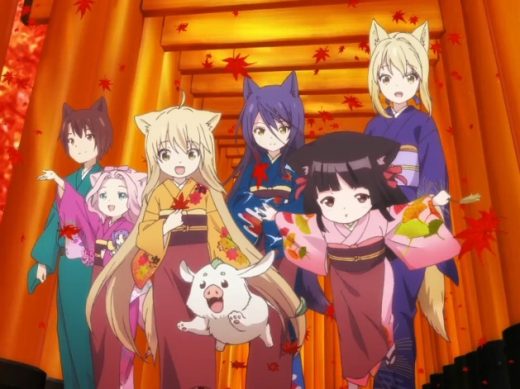 An utterly delightful and absolutely chill anime about a group of supernatural foxgirls who work as attendants in a traditional inn.

Konohana Kitan features the cutest anime girls (come on, they all have fluffy ears!). Girls with sweet personalities, who just want to work hard and help provide their guests with the most pleasant hotel stay they have ever had.

The inn is located in a small town that is home to spirits and gods. A place where people come from far and wide to bathe in the traditional hot springs, and pray at the local temple.

The show doesn’t feature any real drama, just girls going about their day, having fun and occasionally worrying they may not be as good at being an inn attendant as their friends.

All of the characters are wonderfully developed, and all have interesting personalities. The art style is lovely, the music is relaxing and chill, and the stories just wash over you as you sit basking in their warm light.

With a mix of traditional Japanese culture and pure fantasy, Konohana Kitan is not only unique, it is charming and enchanting. 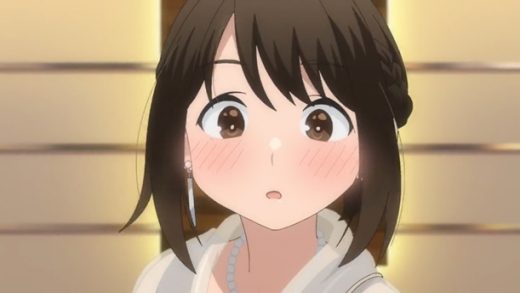 You can finish all of the first season of Ganbare, Douki-chan in just over an hour — each episode is that short.

But, that doesn’t take away from what a chill anime it is, how funny and sweet its’ characters and how adorable its romance as Douki-chan does everything she can to make her office mate Douki-khun fall in love with her.

Unfortunately, she has a rival. Another woman in her office, who loves Douki-khun just as much as she does, but is far more manipulative.

While there is a little bit of fan service, although it is more cute than risqué, when it comes right down to it Ganbare, Douki-chan is actually a very wholesome anime about love.

Between people who really do have problems expressing themselves.

Watch Ganbare, Douki-chan on Crunchyroll, and pay attention to its beautiful art style, as each frame in the entire anime is worth printing out and framing. 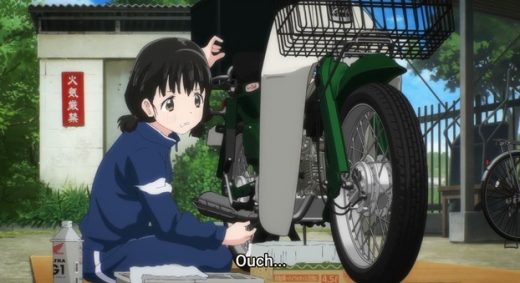 If you love anime about mopeds, or just about girls doing things they love to do, Super Cub is the anime for you.

A little bit like a Honda commercial with its beautiful shots of Honda bikes in all kinds of situations, Super Cub follows Koguma, a high school student who lives alone and has no friends, family or meaning in life.

But, once she buys a Honda Super Cub moped, she finds herself with a group of friends who all love riding the same brand of bike she does.

Super Cub has mellow music, interesting characters who not only love Honda bikes but know a lot about them, and features gorgeous artwork.

It is also the most underrated anime of 2021 with such a pleasant, optimistic feel to it — especially once Koguma, who has never had anything to cherish before, suddenly has friends who care about her and a bike that gives her the freedom she never knew she sought — that you will probably do what I did.

Watch it twice through, it is so so lovely.

Super Cub is streaming on Crunchyroll and on Funimation. 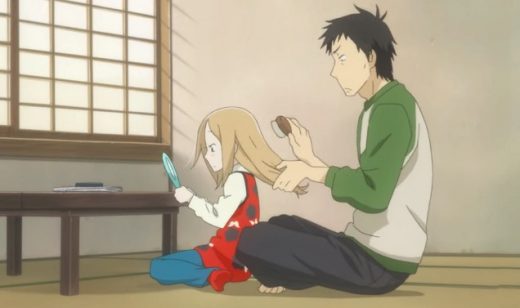 In Usagi Drop (aka Bunny Drop), 30-year-old bachelor Daikichi Kawachi returns to his home town for his grandfather’s funeral, only to discover unbeknownst to him, and many members of his family, when his grandfather died he left behind an illegitimate young daughter.

Nobody in Daikichi’s family wants the girl, so want her to live in an orphanage. This makes Daikichi so angry, he takes the girl, Rin, back to his house in Tokyo and begins to raise her himself.

Usagi Drop is the story of the bond that grows between a young girl nobody wanted, and a man who didn’t want responsibility. Until, suddenly he had it.

It is lovely in every respect, and will touch you to your very core, as you watch this chill anime and see just what it means to really love and care for someone.

Because, even if they aren’t your own child, it’s funny how they quickly become the most important part of your own family.

These 7 chill anime will not only give you hours of relaxation, they will also fill a hole in your soul you didn’t know you had. I guarantee it.