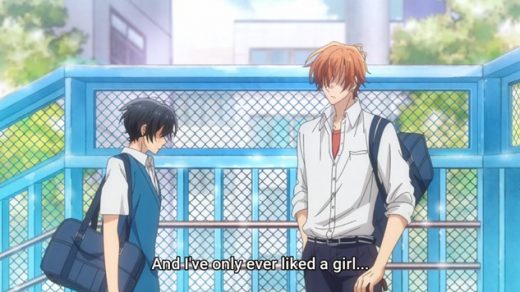 Of course, Sasaki and Miyano, Episode 6, “Feelings” could never be a calm, relaxed look into a boy’s confession and another boy’s reaction.

After all, Miyano may be obsessed with Boys’ Love manga, but he hasn’t quite realized yet there is probably a good reason for that.


Meanwhile, Sasaki calmly confessed his love for Miyano in the anime’s previous episode, and now the chips will fall where they may.

And so, we begin the Sasaki and Miyano, Episode 6 recap and review. 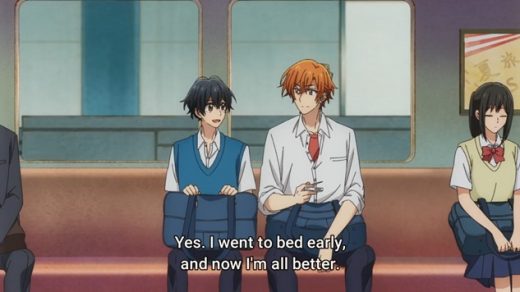 It is the day after Sasaki’s confession of love to Miyano, and Miyano is on the train to school when Sasaki gets on.

Of course, Miyano isn’t going to mention Sasaki’s confession, so the two boys carry out banal conversation, but you can tell from the look on Sasaki’s face he is disappointed.

Miyano, however, is thinking he really needs to take the time to think about Sasaki’s confession. After all, his Senpai takes him seriously, so he needs to do the same.

The problem is, he thinks, he has only ever liked a girl before.

Back in the classroom, Miyano’s friend Kuresawa reminds him Sasaki’s birthday is coming up, and asks if Miyano is giving him a present. 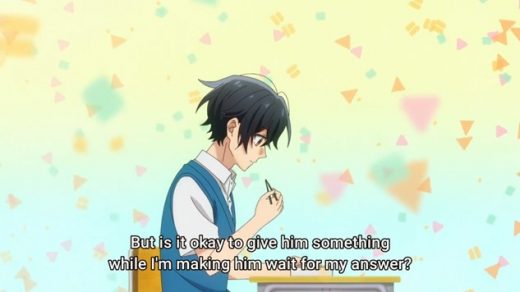 For Miyano, though, as he hasn’t given Sasaki an answer to his confession, he doesn’t feel comfortable buying him a birthday gift.

Meanwhile, Kuresawa is having a conversation with Tashiro about his girlfriend, telling him he fell in love with her when she smiled and he thought “She’s so cute!”.

It is then Tashiro hands out the candy he brought to school, with Miyano remembering it is the same type of candy Sasaki likes. 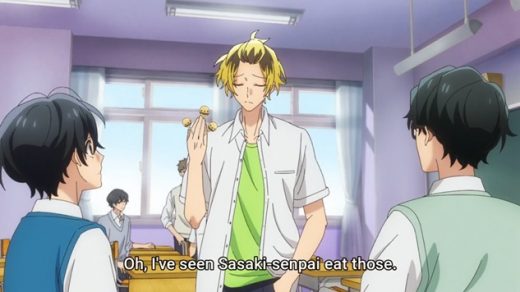 So, of course, he buys the flavor he thinks Sasaki will like and gives it to him on the train the following day. Mumbling “Happy Birthday” as he does so.

And, when Sasaki smiles and says “Thank you”, Miyano remembers Kuresawa saying he immediately fell in love with his girlfriend because she smiled and he thought “How cute!”.

The same thing Miyano now thinks about Sasaki — “Why did I find him cu… No, no. Senpai is cool, not cute”.

The next week at school is filled with days of mid-term tests, with Miyano still not giving Sasaki an answer to his confession.

The problem is weighing on his mind, though, with him admitting to Kuresawa and Tashiro he can’t even read his usual manga he is so stressed.

But he doesn’t tell them why.

By the lockers later, and Miyano is still worrying about what to say to Sasaki so, while walking head down in thought, slams right into him.

Sasaki puts his hand on his forehead, and teases him. But, as Sasaki walks away he looks down at his now open hand — the hand that just touched Miyano — and exclaims to himself in shock “I touched him”. 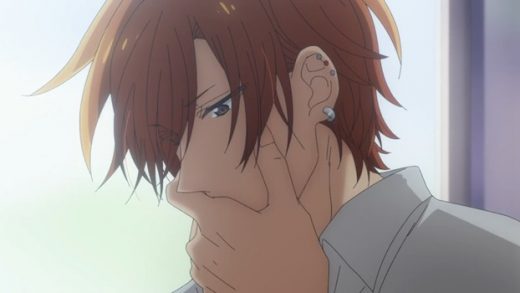 The day ends with Sasaki and Miyano leaving school together, as it’s raining and Sasaki has an umbrella but Miyano doesn’t.

On their walk, Miyano takes the opportunity to talk to Sasaki about his confession but, as has been the situation for days, his thoughts are still going around his head and so he is unable to make a decision.

What he does tell Sasaki, however, leaves him with hope that things still may work out for them in the end.

You will have to watch Sasaki and Miyano, Episode 6, “Feelings” to find out what that was. 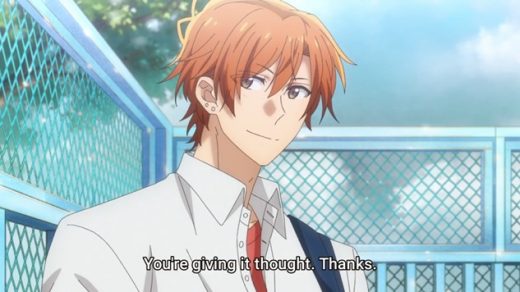 It really is remarkable that a boy obsessed with Boys’ Love manga still cannot see he is actually into boys and not girls. But, thus, is the life of Miyano.

That is why, when he has to make a decision about Sasaki’s confession, he cannot as he hasn’t even admitted to himself falling in love with a boy could ever be a possibility.

Poor Sasaki then is left to keep hinting about how he feels when he is with Miyano, but not able to push him to admit the truth to himself.

In other words, the outcome of Sasaki’s confession to Miyano may just be weeks or even months away as, at the moment at least, it seems Miyano is stuck in place and unable to move forward.

But that is what I love about Sasaki and Miyano.

The real-life situations the main characters find themselves in — and not overly dramatic, unbelievable scenarios with one character professing undying love to the other 10 minutes after a confession.

Instead, it is the quiet introspection of both characters thinking about the confession and taking it so seriously — one as the confessor, the other the person having been confessed to.

The way it would likely be in real life if both boys were as sweet and kind as Sasaki and Miyano.

Sasaki and Miyano, Episode 6, “Feelings” is now being streamed on Funimation. Don’t miss it, as this delightful BL anime series just gets better every week.

You’ll also find recaps of previous episodes of the anime on Leo Sigh: