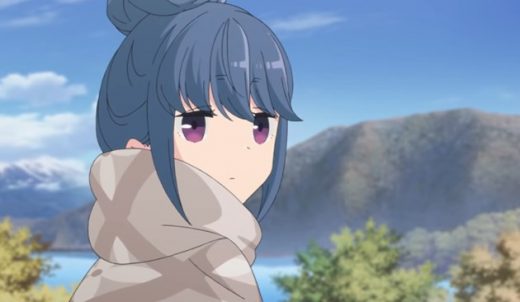 That’s because I love everything about Rin. From her blue hair and her top-knot hairstyle, to her laid-back manner, her sweet personality once you get to know her, her self-sufficient character, and her adorably husky voice.

And that she is not one of the typical young teen anime girls, but is well on the way to being an adult throughout most of the first two seasons of Yuru Camp. Making it that much easier to find her relatable.

How old is Rin Shima in Yuru Camp though, and how much older is she in the just-released-in-Japan Yuru Camp movie as, in that film, Rin and all our lovely Yuru Camp girls have finally grown up.

How old is Rin Shima in the Yuru Camp TV anime?

In the Yuru Camp TV anime, Rin is 17-years-old.

Hence, why she is able to head off across Japan camping by herself, and why she is old enough to get a license to drive a scooter.

Her birthday is on October 1st, making Rin Shima a Libra.

How old is Rin Shima in the just-released Yuru Camp movie?

With the Yuru Camp movie only having been released in Japan earlier this month so far, few details are out yet about the characters or the plot, including how old Rin and the other Yuru Camp girls now are since we last saw them.

We do know they are all adults, however, and that they work full-time jobs.

Rin (voiced by Nao Tōyama) is currently an editor at a Nagoya-based publishing company, and responsible for a town tourism magazine.

Meanwhile, Nadeshiko ( played by Yumiri Hanamori) is working at a Tokyo outdoors store, Chiaki (Sayuri Hara) has a job at Yamanashi Prefecture’s tourism board, Aoi (Aki Toyosaki) is an elementary school teacher in Yamanashi, and Ena (Rie Takahashi) works at a pet grooming salon as an animal groomer.

While the young women are now all working in different places, they get back together in the Yuru Camp movie when Rin decides an area in Yamanashi should be turned into a campsite.

The women reunite to make sure that happens.

So, now you know how old Rin Shima is in the Yuru Camp TV anime. As for Rin’s age in the Yuru Camp movie, we will update this article as soon as more information about the film is released.

Until then, enjoy a glimpse of the fabulous Rin in the Yuru Camp movie trailer below, and watch both seasons of Yuru Camp on Crunchyroll.

RELATED: How to watch everything Yuru Camp in the correct order